Although these tech giants have a long history of crushing the market, they have all fallen behind in heavy tech Nasdaq this year — all but one: Apple. The iPhone maker continues to show impressive performance.

And despite a market capitalization over $2 trillion, there’s plenty of fuel left in the growth tank. Here’s why. 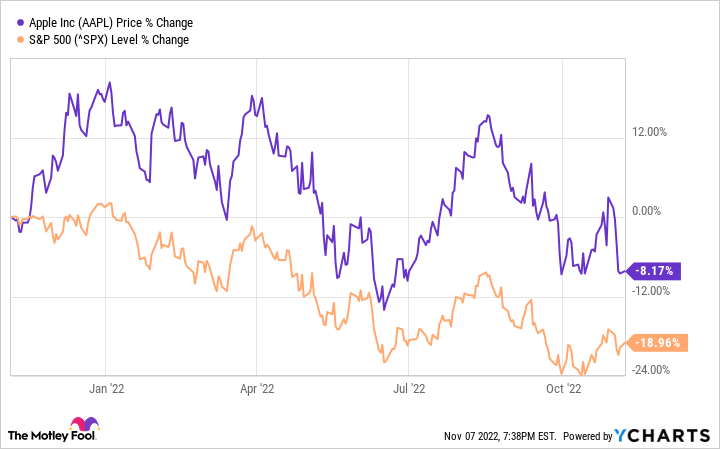 out of the storm

Apple is known for putting its own spin on existing tech devices. It’s done it with the iPhone, its AirPods and many other gadgets, and with great success. But what Apple isn’t known for is low prices. Enterprise electronics typically command high premiums. Given the state of the economy – including decades-high inflation – it’s not crazy to think Apple’s sales would drop dramatically, especially since people can get by just fine without most of its products.

But that’s not what we see. In the fourth quarter of its fiscal year 2022, ending September 24, Apple reported revenue of $90.1 billion, an 8% year-over-year (YoY) increase and a record high for the company’s September quarter. iPhone sales jumped 9.7% year-on-year during the period to $42.6 billion, also a record for the quarter.

Inflation wasn’t the only thing working against Apple. The company has struggled with supply chain issues that have impacted its ability to meet iPhone demand, as well as unfavorable currency fluctuations. In the end, Apple reported earnings per share of $1.29, 4% higher than a year ago.

Apple’s ability to perform well despite all the problems it faces says a lot about the popularity of the company. Customers continue to spend money on the iPhone and other devices despite the very prohibitive prices of these gadgets. That’s why it’s one of Warren Buffett’s largest holdings.

There’s more where it came from

Let’s look at a few areas where Apple can continue to grow, first within its existing customer base. iPhone users are as excited about new releases of the hit smartphone as everyone else. In the fourth quarter, the company saw a record number of upgrades — a good sign that the new iPhone fatigue syndrome that some analysts have been warning about for years hasn’t fully taken hold yet.

Second, Apple is making a strong push into emerging markets, where smartphone penetration tends to be lower. The company recorded strong double-digit growth in markets such as Latin America, Southeast Asia and India. About 78% of the world’s population owned a smartphone in 2020, including 82% in North America, 78% in Europe, but only 48% in sub-Saharan Africa.

Access to mobile devices has only grown in importance. We can reasonably predict that more people in developing countries will be on board, which will help Apple gain new users in those regions. Of course, Apple also attracts new customers by snatching them away from its competitors. It saw double-digit growth in the number of those switching to iPhone during its fourth quarter in 2022.

It should be noted that the switch to faster 5G wireless technology is helping to fuel iPhone sales. Apple’s smartphones have supported 5G technology for a few years now, but global 5G penetration remains quite low, according to the company. This will help bolster the company’s crown jewel as the world catches up to 5G wireless.

All these opportunities will allow Apple to increase its installed base, which reached a new high in its last period. It is an increasingly important aspect of business. It allows it to offer a range of services across its network, from Apple TV+ to Apple Pay, a leading digital wallet. Apple’s entire ecosystem is not easy to leave. Switching requires transferring loads of data, which can sometimes be incredibly tedious.

Additionally, Apple’s services segment has higher margins than the rest of its business. The growth of this unit is great news for Apple’s future.

Here’s one more reason to buy the company’s stock: Apple generates plenty of cash, which allows the company to invest aggressively in research and development efforts and reward its shareholders with dividends. The company returned $29 billion to shareholders in its fourth quarter.

With a robust company that handles tough conditions very well, great growth potential, stable cash flow, and a willingness to give back to investors via dividends, it’s no wonder Apple is outperforming its FAANG peers and the industry. technology in the broad sense.

Rising Number of Golf Courses across the World Driving

When is the best time to score the best deals?