India led by Rohit Sharma suffered their first defeat of the ongoing T20 World Cup on Sunday. The team were beaten by South Africa by 5 wickets in a low scoring Group 2 game. David Miller hit an unbeaten 59 on 46 balls and Aiden Markram scored 52 as the Proteas managed to chase down a 134 run target against India in Perth. It was Suryakumar Yadav’s 68 from 40 that helped India to 133 for 9 after skipper Rohit Sharma opted to strike first.

After the defeat, India slipped to second place in the Group 2 table, with South Africa claiming pole position with 5 points. The Proteas have won back-to-back games after their opener against Zimbabwe was washed away by rain. Meanwhile, their net run rate (NRR) is +2.772.

On the other hand, India have four points from three games. They had recorded back-to-back wins before the loss to South Africa in Perth. Their NRR is +0.844.

Bangladesh ranks third in the table with as many points as India but its TNR (-1.533) is comparatively lower. 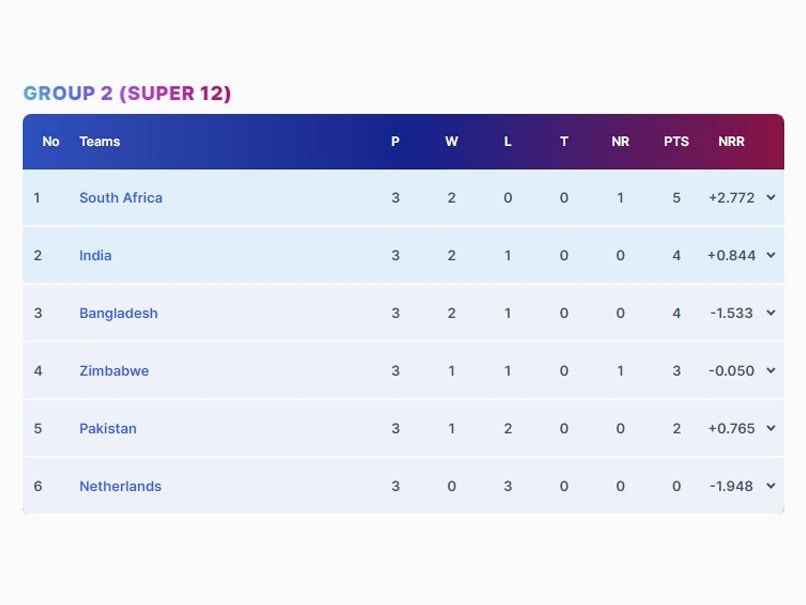 If India manage to win their last two games – against Bangladesh and Zimbabwe – they will easily qualify for the semi-finals. However, a loss in any of these matches will see India’s fate hinge on the results of the other Group 2 fixtures.

If India lose both matches, they will be eliminated from the competition.

Topics discussed in this article

ICC T20 World CUP 2022: India’s SEMIFINAL HOPES take BIG hit, IND vs BAN to be DO or DIE match for both TEAMS: Check Why?