World Athletics announced five nominees for the 2022 Men’s Rising Star Award on Wednesday to recognize this year’s top U20 athlete. Razorback freshman Jaydon Hibbert was one of five athletes chosen for the accolade.

The winner will be selected by an international jury of experts and announced in early December.

“I didn’t expect that because I’m a new talent,” 17-year-old Hibbert said. “As the title of the award suggests, I consider myself a rising star, as it took me two years to get to where I am right now.

“I’m really grateful to see that the world recognizes me as one of those five people to be nominated for this award. I’m happy and it’s made my day, honestly.

Representing Jamaica, Hibbert won triple jump gold at the 2022 U20 World Championships last summer with a record 56-8 (17.27) performance that bettered his previous record by two feet. Usually, event enhancements are measured in inches, not feet.

“As a junior, that’s a big thing,” Hibbert noted. “Furthermore, I am the only Jamaican among the male nominees to be considered a rising star.”

Hibbert, who competed for Kingston College High School in Kingston, Jamaica, surpassed the previous championship record of 56-3.25 (17.15) set in 2018 by Cuban Jordan Diaz Fortun. Hibbert hit the distance on his first jump of the competition after an hour of rain.

“Honestly, I have to surrender it to God at this point,” Hibbert said. “I do the same training as the other people in my school. I guess I’m favored, in a way, since I improved so fast. Whatever I do, I take it very seriously and I don’t give up. Even if I am sick one day, I will always try to do everything I can on that day and forget about the illness. I’ll just try to do my best.

Hibbert narrowly missed eclipsing the Jamaican U20 national record of 56-8.75 (17.29) set by James Beckford in 1994. At senior level, Hibbert ranks second on the all-time list of the Jamaica with No. 4 performance.

For the 2022 season, Hibbert had the world’s top six performances in the triple jump. 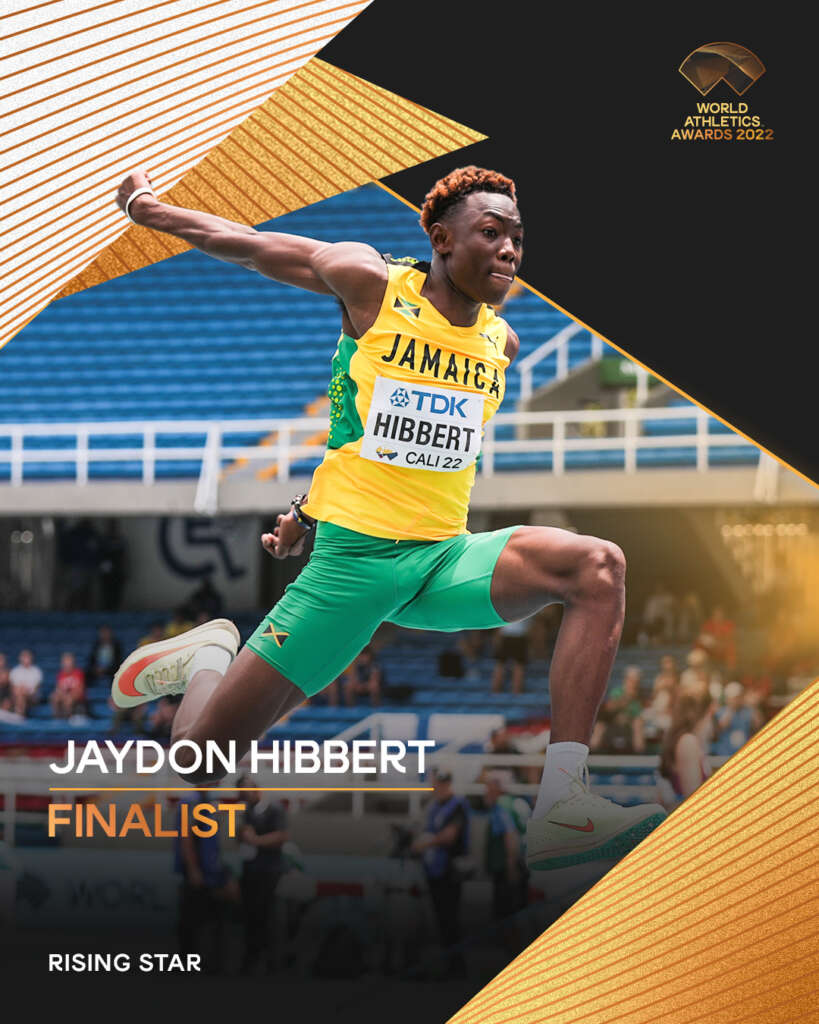 Ammirati won the world U20 pole vault title and had the world’s six best U20 performances of the year. Knighton won a bronze medal in the 200m at the World Championships held in Eugene and broke the U20 world record in the 200m.

Now in Fayetteville and in fall training, Hibbert is adjusting to the transition.

“It’s a little different, but not entirely different,” Hibbert said. “I did most of these things in my high school. The weights are heavier and I have a better streak in my technique for the weights. It’s a big improvement.

“Mentally, I’m still a little fragile to adapt. It’s a new environment with new people and everything new. I’m doing great, though, and still doing well in school. I just do my best.

A bonus for Hibbert is having Jamaican teammates on the Razorback team, including a team of jumpers who are alumni of Kingston College, the same school Hibbert attended.

“It feels good, and I can relate to some people like I relate to people in Jamaica,” Hibbert noted. “It’s hard, though, to speak Jamaican and then speak American. It takes a lot of energy. I like it, though, because there are people here I can have a normal conversation with and not think about anything too much.