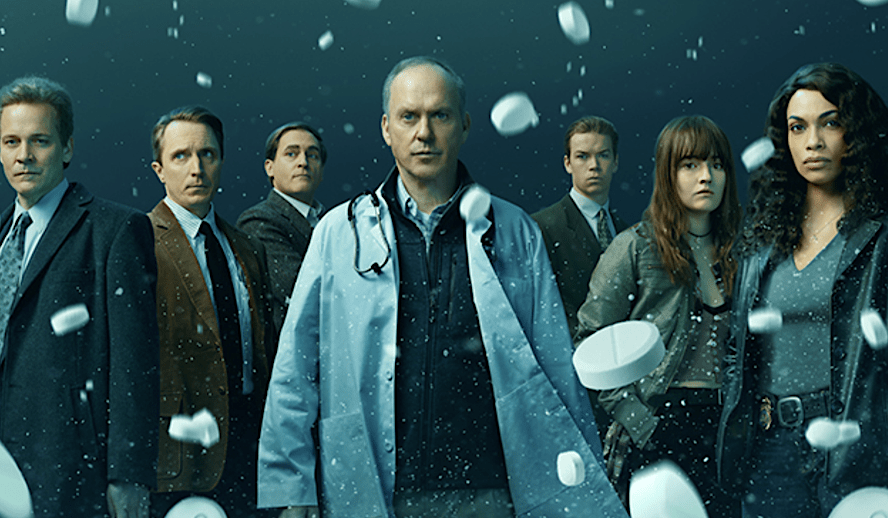 ‘Dopesick’ from Hulu has already been shown to help people understand why we are at this very vital crossroads with opioids in our society. America has always been known to have a big market for illicit drugs, but Fentanyl is taking people out by the thousands. Around our country, we are seeing people get caught in what some call the circle of abuse. It is often a never-ending cycle of abuse due to the withdrawals and addictive properties the drug instills upon the user. For instance,  Fentanyl is being cut into multiple other drugs in order to make the product go further, which is helping to fuel America’s synthetic drug overdose rate. As stated by The National Institute for Drug Abuse: “Illegal fentanyl is being mixed with other drugs, such as cocaine, heroin, methamphetamine, and MDMA. This is especially dangerous because people are often unaware that fentanyl has been added.”

If you have not been paying attention to the news lately, you might have missed that Fentanyl is involved in over 90% of opioid overdose deaths in our country. This drug is 50 to 100 times more potent than morphine and is insanely cheaper. The cost is one of the reasons dealers like to cut with it, it gets someone high and addicted at the same time at a low cost. A majority of these synthetic opioids are produced in China and then shipped to Canada, Mexico, and the United States. In an unclassified DEA Intelligence Report, “Seizures of fentanyl sourced from China average less than one kilogram in weight, and often test above 90 percent concentration of pure fentanyl.” These packages typically come into the United States by way of the black market. A great example of this type of procurement in the film world comes from the documentary ‘Shiny Flakes: Teenage Drug Lord’ produced by Netflix. The particular way synthetic opioids flow into the states is hard to monitor. In House Hearing 115 in Congress in 2017, the representatives spoke about how “Americans are now able to easily purchase powerful synthetic opioids, particularly from China, and have them shipped straight to their doorstep here in the United States via the United States Postal Service.”  Maybe some reform in the postal department is our first step?

Shows like ‘Dopesick’, help to revolutionize the way people view certain drugs and their users. Watching the show sheds light on the issue. The series takes you on a very unilinear ride through the beginning of this crisis, to the first black box warning on OxyContin®. The drug was eventually recalled and re-formulated to deter people from things like injection and snorting. The show got attention from its two Emmy wins and fourteen nominations, and it drew more eyes, which helped drive more awareness for the topic. This drug alone caused entire communities to collapse, something ‘Dopesick’ brought to the forefront for a lot of people who were unsure about opioids’ grip on America. Sometimes, something you can not see with your own eyes is hard to believe.

Related article: The Hollywood Insider’s CEO Pritan Ambroase: “The Importance of Venice Film Festival as the Protector of Cinema”

Related video: EVOLUTION: Every Tom Cruise Role From 1981 to 2021, All Performances Exceptionally Poignant

Now someone can actually witness how this drug can transform an individual. They begin to need the drug more and more, gaining a tolerance to it that creates a circle of abuse. If the user wants to get off the drug, it can feel like their soul is being sucked out of their body. The film industry needs to invest more money into Cinema that touches on this topic.  Drug use prevention is all about getting people to understand the ramifications and consequences before using. The more we can drive awareness, the more we can educate society on this evil. The trends in films are back toward realism. According to Parrot Analytics, US demand for documentaries is outweighing the actual amount being produced. The last few times this movement came about so strongly we were graced with the likes of Frederico Fellini who gave us ‘La Strada’. We also got to see the creation of Cinema Verite, or “truthful cinema.” Now that America is once again striving for realism within the medium of film, I suggest we give it to them, better than ever. I would also urge certain shows that fantasize about drugs like opioids, to stop and add more of the real consequence of their use.

‘Dopesick’ is a testament to truth in cinema. Filmmakers should give the population a taste of the real ways opioids can take over someone’s entire existence. Fentanyl bleeds into the family, loved ones, friends, social groups, and societies one person at a time. I urge the filmmakers of the world to help push more truth in cinema, in order to educate those around us on the ways we can guard ourselves against such accidental deaths.

This is a call out to all the showrunners and producers to help create this type of educational content. ‘Dopesick’ was just one more show that gave us information on an issue that plagues us from the inside out. Given the number of deaths within the country,  awareness is critically relevant and vital to the United States. Television can help show the world just how disruptive synthetic opioids like fentanyl can be for our communities. Although Dopesick was not a documentary, it was based on the truth discovered from the source material Dopesick: Dealers, Doctors, and the Drug Company that Addicted America by Beth Macy.  Beth once said that “ addicts should not be shamed” and we should all inherit this belief. Media attention is one thing but giving the demanding audience of America more stories involving this synthetic opioid can only produce positive results. After all, there have been documentaries and cinema that helped change the world many times before.

Related article: All Best Actor/Actress Speeches From The Beginning Of Oscars 1929-2019 | Hollywood Insider

Change has come from past cinema.  The Thin Blue Line (1988) showed the corruption inside our judicial court system and helped create some reform from within. Icarus from Netflix (2017) is another great example of how informational documentaries can change the world we live in. Not only did it get the Russian doping scandal out into the media, but it caused their immediate disqualification as a country to compete in the Olympics. I would dare to say that if that film was never made, we would never have found out the Russians have been doping for decades. It is only a travesty when the truth is not shared amongst the people of the world. Educational pieces based on real situations can help drive us towards more solutions, and eventually maybe a big curb in synthetic opioid use.

Substance abuse is a hard thing to conquer alone. A lot of people with full-on support systems can still fail against a powerful drug like fentanyl. If you need any help, please reach out to SAMHSA (Substance Abuse and Mental Health Services Administration) at 1-800-662-HELP (4357.) Opioids are powerful drugs and sometimes medical detox is necessary. It can be an incredibly hard feat, but if you are struggling contact them immediately for help. Narcan can also save lives and reverse overdoses if it happens. The more you know, the more you can protect yourself from the dangers of opioids.

Click here to read The Hollywood Insider’s CEO Pritan Ambroase’s love letter to Cinema, TV and Media. An excerpt from the love letter: The Hollywood Insider’s CEO/editor-in-chief Pritan Ambroase affirms, “We have the space and time for all your stories, no matter who/what/where you are. Media/Cinema/TV have a responsibility to better the world and The Hollywood Insider will continue to do so. Talent, diversity and authenticity matter in Cinema/TV, media and storytelling. In fact, I reckon that we should announce “talent-diversity-authenticity-storytelling-Cinema-Oscars-Academy-Awards” as synonyms of each other. We show respect to talent and stories regardless of their skin color, race, gender, sexuality, religion, nationality, etc., thus allowing authenticity into this system just by something as simple as accepting and showing respect to the human species’ factual diversity. We become greater just by respecting and appreciating talent in all its shapes, sizes, and forms. Award winners, which includes nominees, must be chosen on the greatness of their talent ALONE.

I am sure I am speaking for a multitude of Cinema lovers all over the world when I speak of the following sentiments that this medium of art has blessed me with. Cinema taught me about our world, at times in English and at times through the beautiful one-inch bar of subtitles. I learned from the stories in the global movies that we are all alike across all borders. Remember that one of the best symbols of many great civilizations and their prosperity has been the art they have left behind. This art can be in the form of paintings, sculptures, architecture, writings, inventions, etc. For our modern society, Cinema happens to be one of them. Cinema is more than just a form of entertainment, it is an integral part of society. I love the world uniting, be it for Cinema, TV, media, art, fashion, sport, etc. Please keep this going full speed.”

– A Tribute to Martin Scorsese: A Complete Analysis of the Life and Career of the Man Who Lives and Breathes Cinema

– Do you know the hidden messages in ‘Call Me By Your Name’? Find out behind the scenes facts in the full commentary and In-depth analysis of the cinematic masterpiece

– A Tribute To The Academy Awards: All Best Actor/Actress Speeches From The Beginning Of Oscars 1929-2019 | From Rami Malek, Leonardo DiCaprio To Denzel Washington, Halle Berry & Beyond | From Olivia Colman, Meryl Streep To Bette Davis & Beyond

– In the 32nd Year Of His Career, Keanu Reeves’ Face Continues To Reign After Launching Movies Earning Over $4.3 Billion In Total – “John Wick”, “Toy Story 4”, “Matrix”, And Many More

Maverick Is The Platonic Ideal Of An Action Movie

Eddie Redmayne: 5 Movies That Made Me the Actor I Am